At the start of the year, many wondered if Roger Federer and Rafael Nadal were, perhaps, past their glory days. But Federer, coming back from a long injury recovery, and Nadal, almost out of the top ten, then delighted tennis fans by reaching the Australian Open final that Federer won. Now both find themselves the most talked about players entering this year’s US Open. Despite their long history together, neither man has faced the other across the net in New York. If they do in the semifinals, it will cap off what has been the biggest, yet most welcomed surprise this year.

Serena Williams, who won in Melbourne before revealing her pregnancy soon after, will not be in New York. But her absence on the women’s tour is still very much felt. Especially with an ongoing race to the top WTA ranking that now includes eight women in the hunt. One being her elder sister Venus Williams, herself enjoying the best season of her career in some time having reached two major finals. Yet, the open-ended, unpredictable women’s tour these days has many, including one of the all-time greats, longing for the rivalries of the past.

With Federer having won Melbourne and Wimbledon, and Nadal winning a record 10th French Open and recently rising to World No. 1 again, either man winning New York would certainly solidify him as player of the year. Seeing both Federer and Nadal once again playing at their very best has been celebrated and rightly so. What’s been lost, somewhat, in all of the adulation of this return to the “old order” has been the recent decline of the men who only last year dominated the sport.

Novak Djokovic and Stan Wawrinka, who played in last year’s men’s US Open final, won’t be in New York this year. Each man shut down their season after Wimbledon to deal with their own injuries. The decision by both certainly feels inspired by Federer’s own lengthy absence last year to heal from a knee issue that has allowed him to now play some of his best tennis at age 36.

Andy Murray, though arriving in New York, pulled the plug on his US Open by announcing his ongoing hip issue will prevent him from playing this year. Recently Judy Murray stated that his son’s non-stop rise to No. 1 over the last two years may have done more damage than good long-term to her son’s career. The year-long grind of the tour has inflicted its share of damage on all the men listed above.

Some have mused that the lack of a fully healthy Djokovic and Murray has, if not a huge factor, at least made it a little easier for Federer and Nadal to make their rapid climbs back to the top of the game. But then one could argue that the lack of a healthy Federer or Nadal might have made it easier for Djokovic, Murray, and Wawrinka to achieve what they did last year.

Now it remains to be seen if the “Big Four” or “Big Five” will ever be all healthy together at the same time for any stretch of time. Sort of like hoping your favorite band from the (insert favorite decade) will reunite one more time to sing their greatest hits.

The fact remains the rest of the ATP field, outside of the “Big Five” is still trailing them by a great deal, points and ability wise, by a wide margin. There are a few glimmers of hope.

Much has been made, and with good reason, about the rise of young Alexander Zverev this year. A winner of two ATP 1000 titles, including one in Montreal over Federer who dealt with a touch of bad back in that final, Zverev himself agrees he is part of “Gen Now” and not “Gen Next”. Zverev has not done much at the majors yet, but a top four seed in New York could certainly improve his chances of at least reaching the second week.

With several more big names out due to injuries, including Kei Nishikori and Milos Raonic, it’s certainly an opportunity for players to make a deep run at a major for the first time. Nick Kygios and Grigor Dimitrov, long promoted as the next big thing before Zverev ever entered the scene, each reached the Cincinnati final. (A great accomplishment for both, but that was also an event decimated by mulitple players withdrawing early) Can either build on that in New York to prove finally that they really are the heir apparent? Or could an American man like Jack Sock or Sam Querrey, who reached the Wimbledon semifinals, finally give the local fans an actual local to cheer for in the final four?

On the women’s side, once again to pick a clear favorite for the title is a fool’s errand. The depth and parity in the women’s tour likely will mean one player will just have to be the best player over the two loud and distracting weeks in New York to claim the title.

There’s also the No. 1 ranking up for grabs as well. Karolina Pliskova, who reached the finals last year, is still No. 1. But Simona Halep may well have the best chance to seize the top spot. Or will she?

Halep has missed out on three opportunities to rise to No.1, one of them being in the Roland Garros final where she lost to Jelena Ostapenko. Halep now must contend with facing a real wildcard opening round against Maria Sharapova. Sharapova has never lost to Halep in six meetings, yet this is only Sharapova’s second match this summer and she has been out of action due to ongoing injury issues herself, so no one is quite sure how well Sharapova will even play going into this one.

Angelique Kerber, last year’s winner, has struggled so much this season no one is really giving her much chance to make a similar run again. It may well be Garbine Muguruza, who won Wimbledon, who could be the player to beat again.

All this variety, and unpredictability, has some longing for the days of distinct rivalries in the women’s game.

Hall of Famer Chris Evert, who shared perhaps the greatest rivalry of all with Martina Navratilova, recently said the last great rivalry on the women’s tour was between Steffi Graf and Monica Seles. While the Williams Sisters have dominated the women’s game for over two years, their matches, until very recently were not that compelling, while Serena herself has never really had a true rival except for mini-rivalries especially with Victoria Azarenka who will not be in New York due to an ongoing child custody battle. Evert feels that a sustained rivalry between two current players, anyone will do, is what will help grow and maintain interest in the sport, especially on the women’s side.

As to who will actually win, this spinning wheel recently shown on ESPN of all the title contenders might have more accuracy than any seasoned tennis journalist. Or, one could always consult a local clairvoyant. 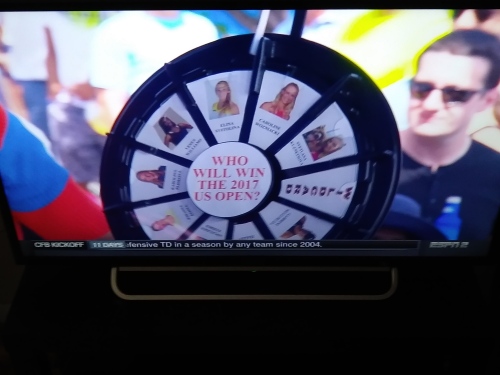 Tennis, as a sport and its many fans, often tends to dwell on nostalgia and is often loathe to change. (The recent addition of a shot clock to the US Open qualifying rounds caused something of mass conniption fit on social media.) But the past is just that – while the present is here.

There is something comforting in past rivalries, especially the familiarity in matchups and the differences in playing styles that create for memorable matches. For Federer and Nadal, the continuation of their own rivalry has come just in time for an ATP still searching for a post Federer/Nadal identity, whenever that day finally comes. And frankly, everyone hopes both men can keep playing well for the next three or four years, especially if Djokovic, Murray, and Wawrinka can also find a way to full health to challenge them. Talk about glory days indeed.

Comments Off on Glory Days: 2017 US Open Preview