Will the Fans Align in L.A.? 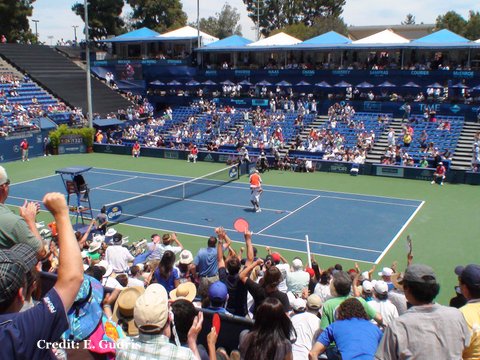 The ATP event in Los Angeles now known as the Farmers Classic has a soft spot in my heart. It was the first tennis tournament that I was ever credentialed as media for (my first ever tennis press conference was with Andre Agassi and John McEnroe minutes before they played in an exhibition match, not bad right?) and it was an event where I was able to enjoy watching some of the sport’s rising and established stars in a very intimate venue.

Though the event is one of the oldest tennis tournaments in the United States with a roll call of champions including Rod Laver, Arthur Ashe, Stan Smith, Pete Sampras, Jimmy Connors, Andre Agassi, John McEnroe and other greats (o.k. Ernests Gulbis did win last year but we’ll give him his due), it’s spot on the calendar in recent years has made it difficult for the event to attract big name players and with the Olympics happening a week before L.A. in 2012 that’s no exception. This year, with recent transplant Mardy Fish recovering from injury, the top seed is the mercurial yet still widely unknown French talent Benoit Paire.

Despite being in a town full of many diehard tennis players, that has not been enough to generate sustainable interest in the event in the last few years. With the return of the ATP Tour to Atlanta in the week prior to the Farmers Classic, L.A. since 2009 has struggled to attract what I would call marquee names to the tournament. In 2010, Novak Djokovic was scheduled to play but he withdrew weeks before the event. As a result Andy Murray, likely persuaded with the help of an appearance fee, flew in at the last minute to appear as the top seed.

Since then the tournament has decided to stop paying appearance fees and though one can’t blame the event for doing so especially in these fragile economic times, some wonder if it ends up costing them since they are unable to attract the elite of the tour. There’s also the factor, at least to me having lived in the city for six years, that L.A. as a whole being the “star capital” of the planet likes to watch stars play sports and a perceived lack of them tends to make even casual fans less interested in attending tennis events.

Though L.A. has held several exhibition matches featuring past greats and associated music concerts that even featured Coldplay last year, tournament organizers admitted in a recent article for Tennis.com that those additional events, though well attended, don’t really create extra ticket sales for the tournament itself. This year L.A. is toning down on the concerts and hoping that a healthy mix of American players not going to the Olympics, including Southern California local Sam Querrey, will be enough to generate if not a sell-out then at least a decent if lower turnout.

With the tourney’s major sponsors scheduled to review their commitment after the end of this week, one hopes that they give L.A a thumbs up for managing in this Olympic year especially in the wake of San Jose recently losing its ATP event after being a mainstay of the Bay Area for decades. One can only hope that despite the lack of big names, local fans will come out in force to support the event simply to prove that they love tennis no matter who is playing on the main courts and continue L.A.’s legacy of being one of the hallmark tennis stops that every legend, confirmed or aspiring, has played at least once during the always pivotal U.S. summer hardcourt season.

Read the Tennis.com post on this week’s L.A. event here.

Comments Off on Will the Fans Align in L.A.?