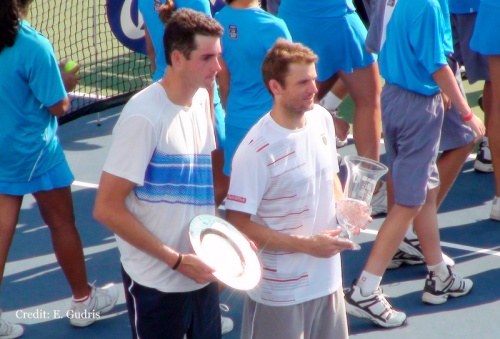 The venue for the this year’s Atlanta Tennis Championships final may have been different, but the two finalists and the outcome of the match itself could well end up feeling like déjà vu for both Mardy Fish and John Isner who once again battled for three sets in hot conditions before Fish went on to claim his second Atlanta title 3-6, 7-6 (3), 6-2 in over two hours. For Fish, it’s the first time in his career he’s defended a title and marks an impressive start to his summer hard court season. But once again Isner comes up short in a final where he had match points, raising questions on how long his newfound confidence and return to form might last.

Despite a shaky opening service game that had Isner facing break points against him, Isner recovered and then broke Fish to go up 3-1. Fish looked unsettled and had a hard time dealing with Isner’s big serve which the University of Georgia graduate used to close out the first set 6-3. When an ill-timed drop shot and forehand errors from Fish gave Isner an early break in the second set, it looked like Isner might run away with the match. But after Fish broke back right away, Isner began looking fatigued and several times clutched his right side.

Fish started getting a better read on Isner’s serve but Isner managed to compose himself and his game, staying level with Fish until they reached a tiebreak. Early errors from Fish gave Isner a commanding 5-1 lead. Fish held for 5-4 on his serve, but Isner then went up 6-4 during his turn to serve giving him two match points. But during a rally, Isner forced a backhand long allowing Fish to eventually level things to 6-all. Fish then claimed the set when Isner hit a forehand wide on the ad side.

Isner, who admitted dealing with an upset stomach afterwards, looked weary and deflated heading into the final set. After dropping serve early, Isner looked spent and sometimes wouldn’t even move for returns. He did manage to get two break points on Fish’s serve at 2-3 but Fish held his ground. When Isner double faulted to give Fish another break, the final was all but done as Fish closed out the match on his serve giving him his sixth career ATP Tour title.

A disappointed Isner in his press conference afterwards admitted he should have won the match and wondered aloud if his dismal record against fellow Americans might have been a factor as well. “The match was in my hands. I was up a set and break. Simple as that. And I did not get it done. I’ve lost five finals in my career. Two to Mardy (Fish), two to Sam (Querrey), one to Andy (Roddick) that I arguably could have won every single match. This is the second one I’ve had match points in. Other ones I’ve been one, two points away. I don’t know what it is. I’d rather see a foreigner in the final. I keep coming up a little short every time I play a friend.”

When asked about coming back in the second set tiebreak Fish said he had nothing to lose and that it was a bit of luck plus sticking some returns when he needed to that got him out of the deficit. On defending his title in Atlanta, Fish said, “It feels great to win here again and start off the summer like I did last year. This year, it was a bit different coming in as the top seeded guy. You’re sort of in the position where everyone is looking for you, knows where you are, so it feels great to come through today and all week.” On his immediate goals Fish said he wanted to make the “Masters Cup”, now known as the ATP World Tour Finals and stay in the top 10. “The goal is to do better than last summer, and last summer was better than I had ever done before. I want to stay in the Top 10 for as long as I can and keep bettering my career high ranking and do things I’ve never done before. Today is one of them as I had never defended a title before, so it’s another milestone for me.”

Fish now heads to his home of Los Angeles to compete in next week’s Farmers Classic while Isner will next see action at the Legg Mason event in Washington D.C. In the men’s doubles final, American Alex Bogomolov Jr. and Australia’s Matthew Ebden defeated the German team of Matthias Bachinger and Frank Moser 3-6, 7-5, 10-8.

2 responses to “Isner Loses His Grip on Fish in Atlanta Tennis Championships Finals.”